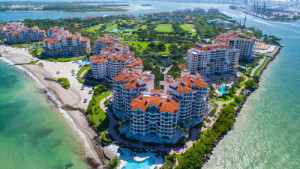 Dana Albert “D.A.” Dorsey cemented his place in history as the first African American millionaire in Miami. He also has strong ties to Fisher Island as it was he who sold the famous parcel of land to Carl G. Fisher, a land that would go on to become one of the most acclaimed, private, and upscale neighborhoods in all of the southeastern United States.

The Dorsey House in Miami’s Overtown neighborhood is one of the remnants of Dorsey’s vast legacy that still stands in the city. However, the home that was once considered a mansion has fallen into significant disrepair, with a damaged roof and decaying walls that could use some upkeep.

The Black Archives History and Research Foundation of South Florida is now looking to restore the home to its former glory and has already received more than $100,000 in grant money from the City of Miami to start focusing on restoration efforts. However, additional funds are needed to complete the project. Should you wish to contribute, you can donate directly to the foundation or visit the website GoFundMe to make a contribution.

To learn more about Dana A. Dorsey, check out the blog posted in June which sheds a little more light on him.