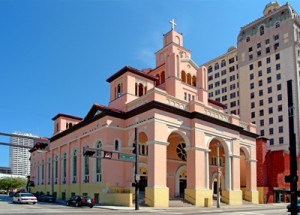 The historic Roman Catholic Gesù Church is located in Miami and was established as a result of the city’s strong Catholic community, it is the oldest church of its kind in the city.  When it first opened back in the late 1800s, the church was originally made of wood and was built upon land that was donated by American industrialist Henry Flagler, commonly known as the father of Miami and Palm Beach.  The Gesù Church’s current concrete and steel structure began construction in 1921.

Throughout its many years Gesù Church continues to be South Florida’s spiritual ambassador for its strong Catholic community.  Besides functioning as a church, the Sisters of St. Joseph ran the Gesù Church’s Gesù School which opened in 1905 and was originally named The Academy of the Sisters of St. Joseph St. Catherine’s Convent.  The school continued to operate for numerous years until it was demolished in 1984.

To this day, Gesù Church continues to serve as one of the three downtown churches and since 2004 its parish has been staffed by the Jesuits of Antilles province.  As South Florida’s oldest church, Gesù invites everyone to visit the landmark that has served the community for more than 100 years.